Get fresh music recommendations delivered to your inbox every Friday.
We've updated our Terms of Use. You can review the changes here.

Songs From the Bend in the River 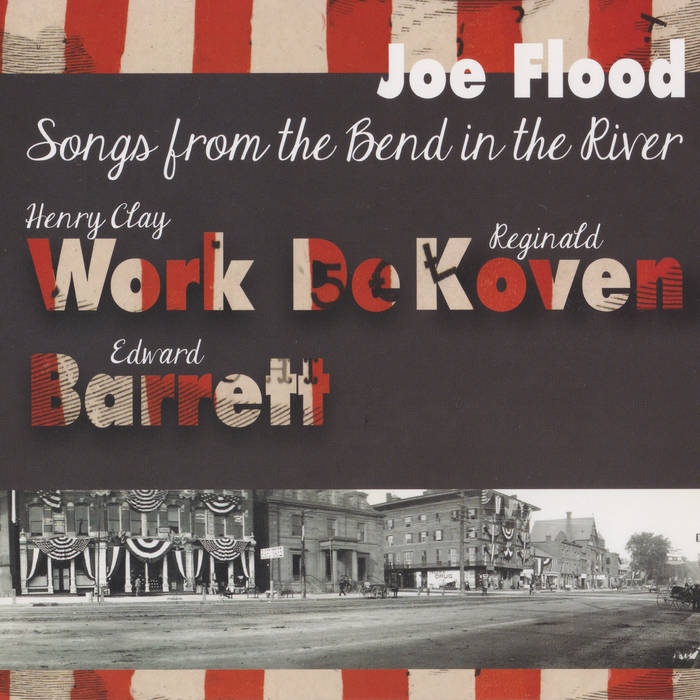 All songs Public Domain, music and lyrics arranged and adapted by Joe Flood
Produced by Joe Flood and Andres Villamil
Henry Clay Work (1832-1884) Reginald DeKoven (1859-1920) Edward Barrett (1817-1914)
"The Wreck of the Old 97?" "Charley on the MTA?" Both based on "The Ship That Never Returned" by Henry Clay Work who in 1875 wrote "the most popular song in America," "Grandfather's Clock," as well as "Marching Through Georgia," "Come Home, Father," and a couple hundred more. Reginald DeKoven? The composer of "Robin Hood," the first successful American comic opera, as well as 19 other operas and hundreds of published songs and shorter pieces. And Edward Barrett? The Penny Press, a local paper that sold for the title sum, published about 250 of his poems, sometimes with suggested "airs," generally traditional Irish songs.  These three men--two born in Middletown, Connecticut who went on to be as famous and successful as any tunesmith could be, one an Irish immigrant blacksmith  who was something of a local character--have today all earned the same great distinction: anonymity.  For isn't that the greatest success of a songwriter, to have a song or two still being sung long after your name has been forgotten??
I have to thank Ed McKeon for telling me that "Grandfather's Clock" was written by Henry Clay Work and that that was his bust on the South Green where as a teenager I would play the blues with Nate Simmons and Michael Foley. And I have to thank Tom Callinan for recording Edward Barrett's "The Quarry Company." And Tom said to call Joyce Kirkpatrick who told me that the Reginald DeKoven in Hoagy Carmichael's "The Old Music Master" was from the same family as the DeKoven House down on DeKoven Drive.
That's how all this digging started: the Middlesex County Historical Society, the Russell Library, the Library of Congress, old sheet music, old recordings. This project is a little bit of musical quarrying, going beyond the freestone you can pick up from the fifes and drums in the Memorial Day parades--Work's melodies, Barrett's "airs"--and closer to the bedrock that the polka bands and garage bands and Dixieland bands I heard as a kid were all standing on, everything that the succeeding generations have added to this place at the bend in the river, just as time left us the river, the stone, and the timber that built it, literally and figuratively.
Before we speed off again into the ever more uncertain future, is it too much to ask to take the time to sing these songs and remember the men who wrote them before they're forgotten altogether? Maybe to hope that in 100 years someone might care enough to sing one of ours, too?

Joe Flood is a songwriter, singer, and multi-instrumentalist who has performed, written, and recorded with many of the great names in American roots music, among them The Band, Blues Traveler, Dr. John, Bottle Rockets, Laura Cantrell, Eric Andersen, Happy and Artie Traum, Jim Weider, Eric "Roscoe" Ambel, Jono Manson, and the list goes on! Please visit www.joefloodmusic.com for more information. ... more

Bandcamp Daily  your guide to the world of Bandcamp